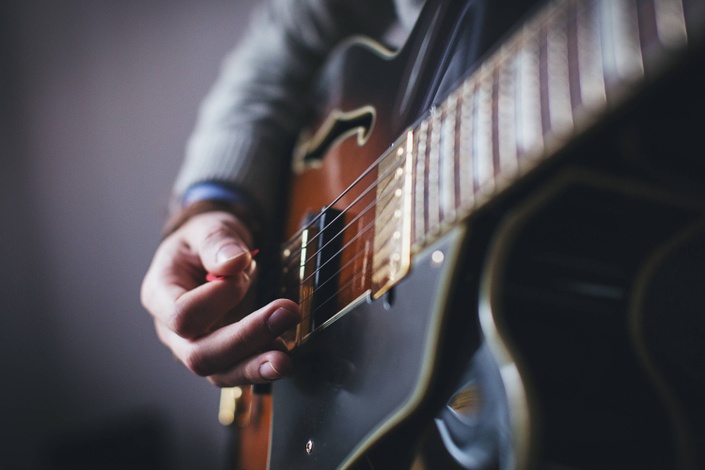 Free yourself from the scale-noodling rut to create confident, tasteful guitar solos in any genre.

Why does it seem like some lead guitar players just have it? And others fight tooth and nail just to plunk their way through a scale?

I’ll tell you exactly what the secret is.

Back in my high school years, I learned everything I could about scales, modes, and music theory, hoping it would make me a monster player.

And then I did what few people do. I actually practiced the stuff I learned.

Only problem was, while I definitely improved from all that knowledge and practice, I couldn’t help feeling disappointed with my soloing. It felt like I was missing some critical piece of the puzzle.

Luckily, my guitar journey led me to study jazz in great depth, and that gave me the crucial insight that I could apply to every other genre I had ever played.

What was that missing puzzle piece in my soloing?

Emphasizing chord tones throughout your solos is the single most impactful thing you can do to improve the quality of your lead playing.

Whether you’re just dipping your feet into lead guitar or trying to step your game up to fulfill your true potential, a firm grasp of chord tones is your golden ticket.

But how do you bake that tactic into your playing? Read on.

How I Transformed My Soloing 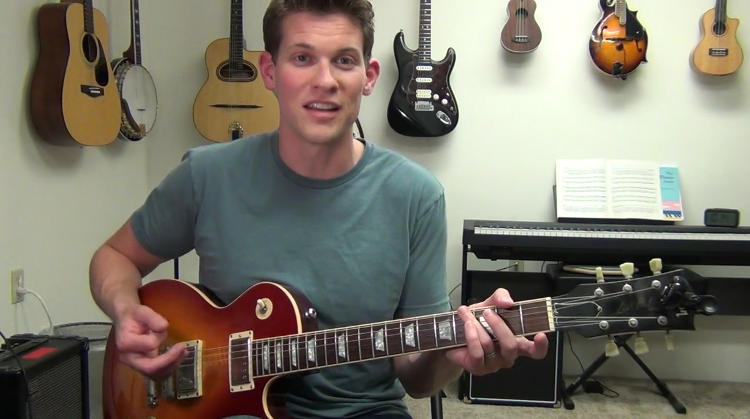 My name is Joe Walker. I run Deft Digits Guitar Lessons in Seattle.

As I tried to emulate some of these guys, I got really good at the standard blues box licks. I even learned some scales and modes, but my best attempts at using them just sounded like random notes, because that’s exactly how I was using them.

Then I started studying jazz, and everything changed.

From day one in the Jazz Improvisation course I took in college, the following decree was put forth:

While the guitar tone and lick vocabulary in jazz is vastly different from blues or rock playing, I found that that simple instruction, emphasize chord tones, applied to every style I had ever touched.

You get where I’m going with this. Any time you’re making a melody, with any instrument, in any genre, tie it in with the harmony. Emphasize chord tones.

OK, so I had unlocked the magical secret of chord tone targeting. I understood how it worked, and I could hear when things sounded great.

But something was missing.

Every time I tried to improvise with these new directions, my playing would revert back to the same ruts I thought I had already overcome. Rock, blues, jazz, most of my soloing was still a combination of stock licks and scale noodling. I felt like my playing lacked authority.

Fast-forward ten years, a master’s degree in jazz, and hundreds of students passing through the doors of my private guitar teaching studio in Seattle. I can tell you from here, there is a light at the end of the tunnel. I'll never reach the end of what I need to learn, but I can say with confidence that I now know what I’m doing!

So how did I get to this point?

I had a few teachers and worked through a few books along the way that really helped me burn these concepts into my muscle memory and musical instincts. I wish I’d had these experiences years earlier!

In this online guitar course, Solo Like You Mean It, I’d like to show you all the best methods for moving your awareness of chord tones from the slow, calculating part of your brain to the fast, intuitive part of your brain.

It won’t be quick, nor will it be easy. But we can lift the fog from the path ahead.

The course is broken down into seven step-by-step modules that allow you to walk through each of the essential soloing exercises that I’ve learned and modified from my favorite teachers and books.

Included in each module is a demonstration of the soloing exercise and several practical examples over a variety of chord progressions. We’ll mostly focus on basic rock grooves to keep it simple. You’ll be able to apply the skills you learn to any genre, so we don’t need to get too deep into any one style in the examples. We’ll keep it all accessible.

This course is not meant to give you any new physical skills on the guitar. We’re going to take your existing skills that you’ve worked so hard to attain and focus them on the most effective ways to play lead parts and solos. The work, and the progress, will be primarily mental.

What Topics Does the Course Cover?

Some of us love music theory (me!), and some of us run away screaming. But I promise to cut right to the meat of what you need as a lead guitarist without nerding out on theory for theory’s sake. Just remember we’re using it for something really important (soloing).

We’ll start from square one, but I won’t waste your time if you already know some music theory. This is not a comprehensive course on music theory, just a narrow application.

The number one thing music theory can reveal for us…

The notes in the chord!

Kind of indispensable if we’re planning on emphasizing chord tones.

I’ll walk you through how to figure it out for any major or minor or 7th chord you see. You’ll learn how to name the notes in any chord, but more importantly, how to find those notes quickly on the fretboard.

Over the years, with all the books and teachers and fellow players I’ve learned from, I’ve tried countless exercises to make the process of targeting chord tones more intuitive in my playing. Only a small handful of those exercises have yielded fantastic results, and those are what I’ll pass on to you in this course.

Here are a few of the exercises you’ll learn:

Each one of these will take you out of your comfort zone. You’ll have to expend an abundance of brainpower. But in the process, you’ll build a new comfort zone. Just like learning a language, you’ll gradually move from a slow, calculating execution to a fast, easy fluency.

3. How to Build a Vocabulary of Licks

We’ll look at a wide variety of chord progressions and genres for applying your new skills. The goal of this course is to give you the tools to solo in any style of music. While some fundamentals will remain in place wherever you turn (i.e. the overall approach of emphasizing chord tones), you’ll still want a different superficial approach to different genres. It all depends on context.

Think of the different literal vocabularies you use when speaking to a college buddy, your grandma, your boss, a three-year-old, or the kind fellow who just cut you off in traffic. It’s the same language with the same grammar in every case, but your choice of words and phrases is tailored to the context.

Same thing with music. If you haven’t built up a vocabulary of licks and phrases in a certain genre, you’ll have a hard time making an impact with your solos.

Luckily, this process happens naturally when you play your favorite solos and imitate other players. But you can really supercharge your progress by deliberately keeping track of licks that you want to become a part of your pallette.

I’ll show you my favorite methods for building a vocabulary of licks that will be uniquely yours.

Do These Strategies Work for Normal People?

A few years ago, I made a free 12-minute video: Intro to Chord Tone Soloing. The video barely scratched the surface, but the responses from viewers kind of blew me away. To date it’s my top-rated video on YouTube. Here are a few of the comments. 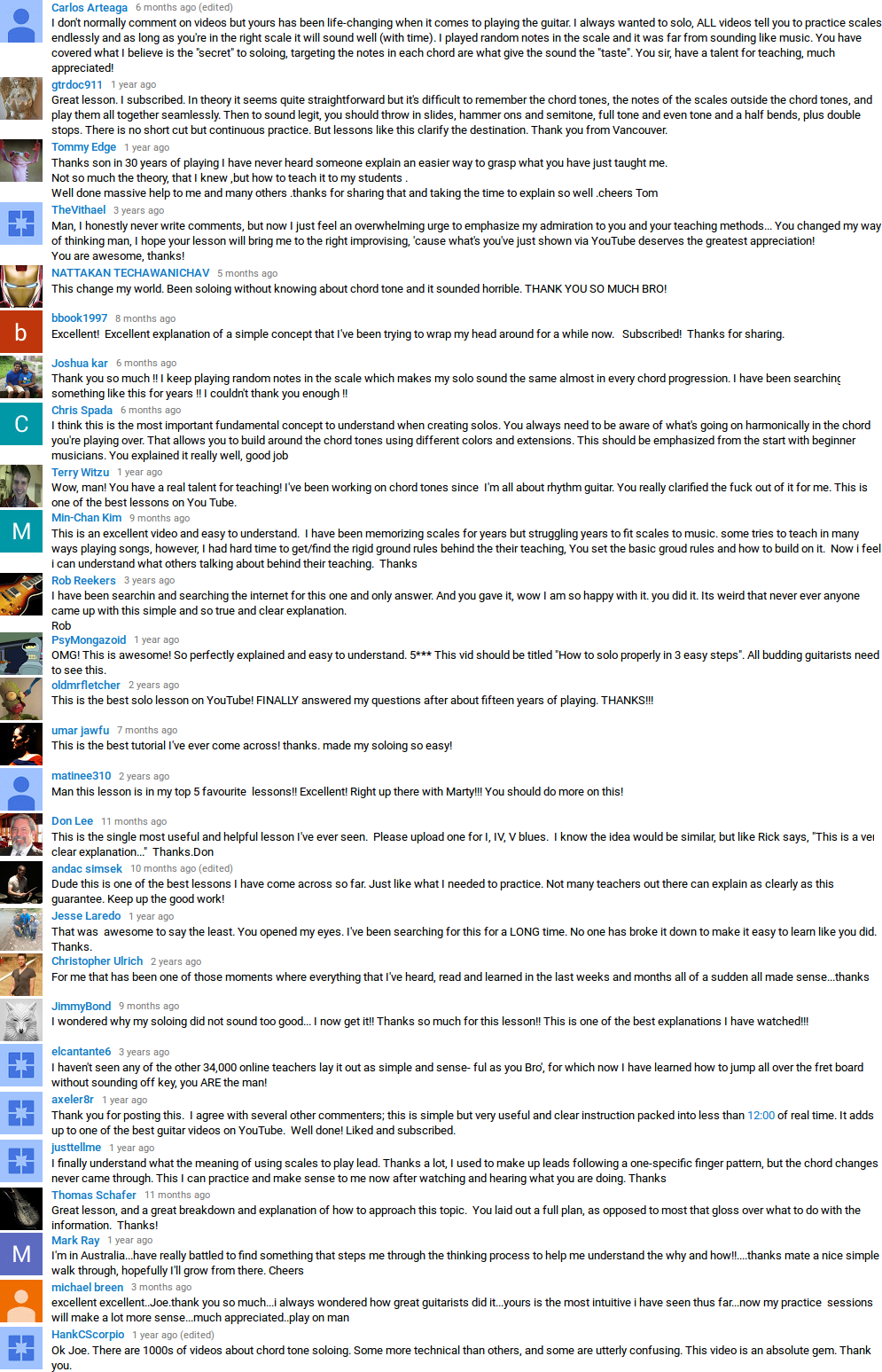 When will the course be available?
Immediately! The moment you enroll, you'll be able to work through the entire course at your own pace.
Will this course continue to be updated? And will I get free access to future versions?
There's no update schedule in place, but I will no doubt make improvements and add new content down the line. Once you are enrolled, all future versions are free at no cost.
What if I am unsatisfied with the course?
Contact me within 30 days, and you'll get a full refund. No questions asked.
Will this work for someone who is just getting started with lead playing?
Absolutely. I'm not interested in showing already-great players how to improve in this course. My aim is to help struggling guitarists get a taste of greatness in their soloing. While my target student is someone who already knows how to noodle around on scales and yearns to play with more authority, all of the techniques in the course can be applied from day one of your lead guitar life.

However, this is not a course for total beginners. Make sure you already know how to fret notes, strum chords, and play riffs. Once you have a good sense of what it means to play rhythm guitar vs. lead guitar, and you're eager to explore the latter, then you'll be welcomed aboard.
How long will it take to work through the course?
While this primarily depends on your prior experience, how often you practice, and how quickly you learn, I designed the course to be consumed at a rate of one module per week with 30-60 minutes of practice per day. That would take about seven weeks total, but you’re free to take your time or binge through as you see fit. If you're looking for a shortcut to better guitar soloing, then this isn't the course for you. Real results will require deliberate practice on your part. The more focused work you put in, the faster you’ll progress.
Will some of the material be of value for acoustic soloing as well, or will techniques rely heavily on bending and playing beyond fret 12, etc.?
While it would be unrealistic to promise mastery of every genre, you'll learn to use reliable tools for creating melodies that can be used in any style of playing. Examples in the course come from a variety of areas just to demonstrate each concept's universal applicability. We'll look at slow and fast tempos, acoustic and electric, legato and fully picked lines, open string runs as well as the high bluesy bends.
What media will the course use?
Lectures are presented primarily with videos as I explain and demonstrate each exercise. PDFs are included whenever notation or tablature would help. All backing tracks used in demonstrations are available as mp3 downloads.